Did the Fed Meet its “Mismatch”? Federal Reserve Chairman Jerome Powell continues to insist that recent price increases are temporary and, therefore, the Fed is content to allow U.S. inflation to run as high as 2.5% before they need to “act.” Whether Powell is right remains to be seen. But for investors, his reluctance raises a range of questions. Which prices are rising, and why? What factors would tend to make inflation persist? Where does the U.S. dollar—or, for that matter, interest rates—fit into the equation? What about rising labor costs? Is there really “slack” in the U.S. labor force?

The upshot: The “reflation trade”—higher yields, strong commodities and outperformance among value and cyclical stocks—remains our investment north star.

The good, the bad, and the inflationary

Even though U.S. GDP growth was slightly below expectations at an annualized 6.4%, it was still a very strong showing for the first quarter. Inventories fell as supply shortages constrained production. Consumer spending was mostly directed toward goods (up 23.6%), while spending on services increased by only 4.6%. (The latter is likely to rise dramatically as the U.S. economy continues to reopen and services rebound.) A shortage of input supplies led to lower-than-expected U.S. durable goods orders, while low inventories held back sales of existing homes. These shortages could lead to higher prices. A better match between inputs and production could take a long time. Bottlenecks, shipping costs, and supply-chain disruptions could be exacerbated by COVID-19-related travel restrictions. All of these factors make one thing clear: Optimism abounds—but uncertainty remains. 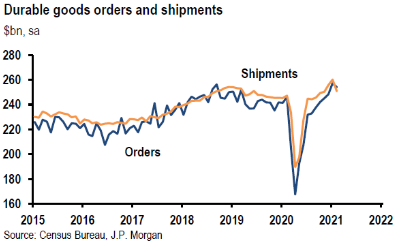 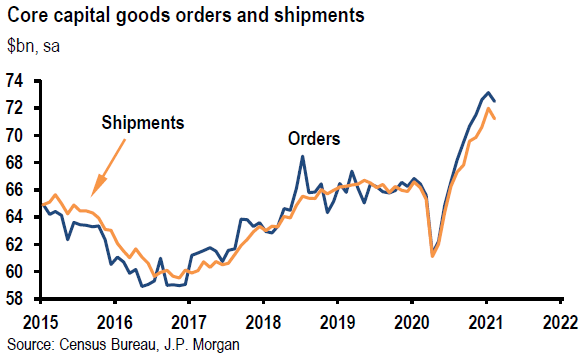 Many recent surveys show that U.S. manufacturers and service providers are paying much higher input prices, including for labor. Companies increasingly report narrowing margins due to supply chain disruptions, increases in raw material costs, and rising transportation costs. COVID-19 vaccination rates—in a race against virus variants and mutations—will continue to be an important determinant of where things are headed. For example, Whirlpool recently announced increases in their retail prices, 3M noted rising input, labor, and shipping costs, and Ford lowered their production rates due to supply chain disruptions—specifically semiconductor shortages. Overseas, India’s central bank recently said that such disruptions could increase inflationary expectations, and some of its states’ governments imposed curbs on peoples’ movements. India’s retail prices are already approaching 6% increases. 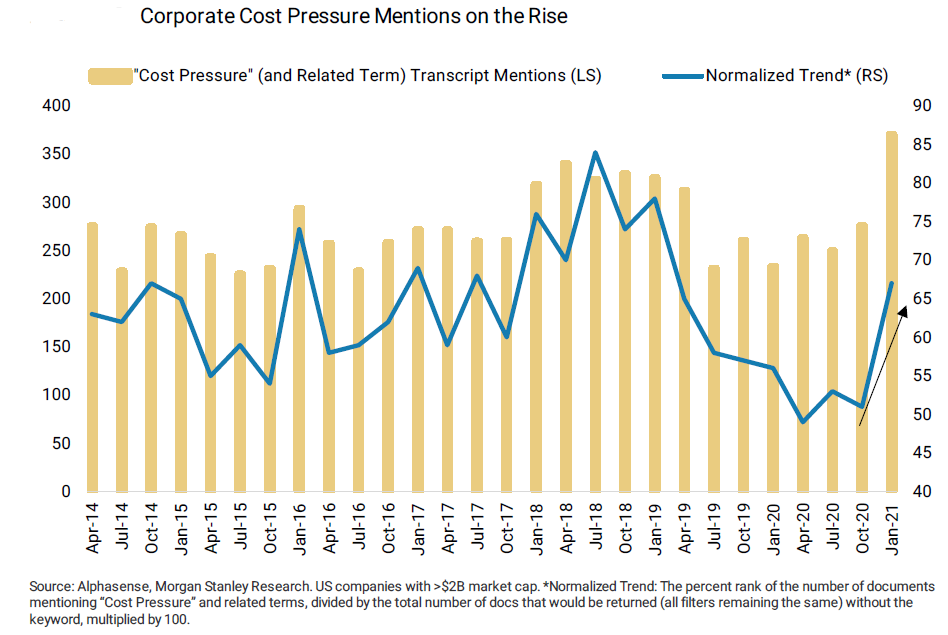 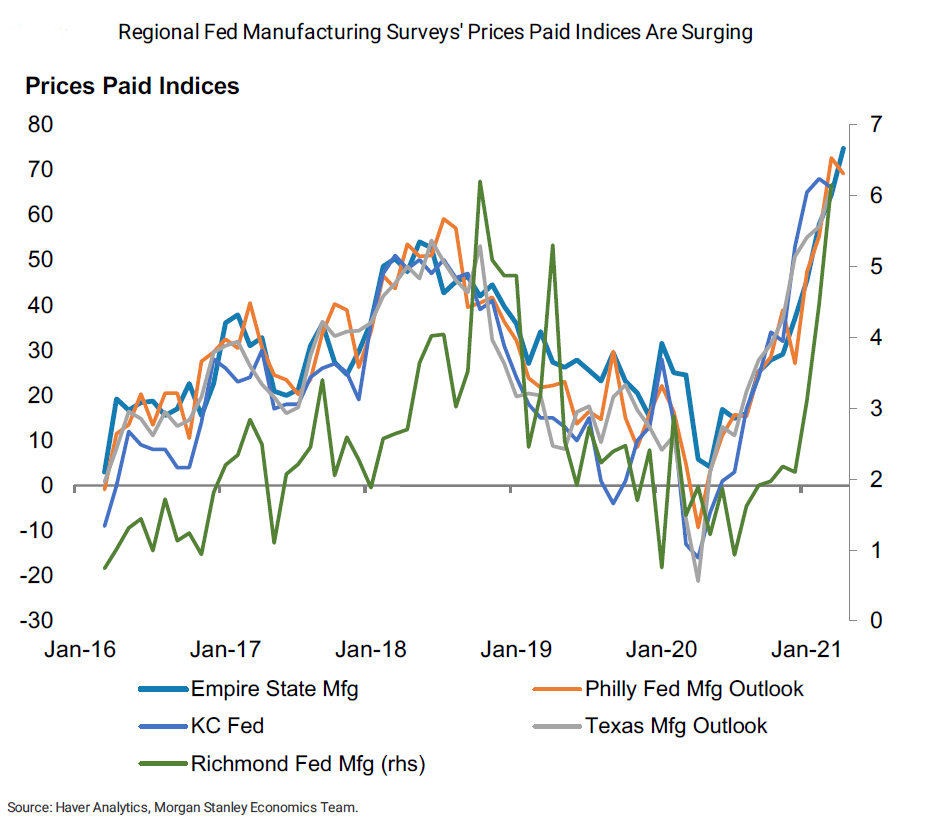 Global commodity prices have been especially troublesome. Agricultural prices are up 16% in April. Wheat, corn and soybeans—all critical to much of the world’s diet—are hitting highest price levels since 2013. Copper and other base metals have hit multiyear highs, and energy prices continue to rise, amid pent-up demand. As vaccination rates rise in India (the world’s third-largest oil importer) and Japan (the fourth-largest), demand for oil will increase dramatically. Indeed, Goldman Sachs projects that such demand will grow by more than 5 million barrels a day over the next six months—an unprecedented rate—pushing the price of Brent crude up to the relative rare air of $80 a barrel. Goldman expects copper to hit new record highs over that period as well. Meanwhile, lumber prices continue to hit multiyear highs as U.S. home prices increased 12%—the most since 2006—in February (versus the same period last year).

Admittedly, there are many reasons why inflationary pressures are increasing across the board, but a vicious cycle could be at play: More companies will become more confident in their ability to raise prices as they see their competitors exhibit pricing power. The more widespread inflation becomes, the more inflationary expectations will increase.

The jobs are out there

Despite what Fed Chair Powell calls “slack” in the labor market generally, many U.S. labor costs are rising due to tightness in specific job markets. The reason is an apparent mismatch between available skilled workers and job vacancies: The COVID-19 pandemic accelerated digitalization in many sectors. But because their existing workforce couldn’t adapt or be retrained quickly enough to meet changing demands, employers have been forced to raise wages in an effort to attract the employees they need. This trend was underscored by NFIB’s most recent monthly survey, which found an unusually large proportion of small business owners unable to fill many job openings. Moreover, increases in labor costs tend to be very persistent.

U.S. consumer confidence rose to a robust 121.7 in April, up from a revised 109 in March and well above the expected 114 level. More confident consumers, who squirreled away savings during the pandemic, will tend to spend more freely. Much of the beneficiary will be the services sectors, which should help travel, hotels, restaurants, bars and retailers. We could see a precipitous drop in the unemployment rate as services rebound. Even so, at some point unemployment will probably stagnate until there is a better match between the labor force and job vacancies.

The yields are increasing

As inflationary expectations become more entrenched, higher interest rates and a steepening yield curve are likely on the way. This week the Fed reiterated its dovish stance on monetary policy: On Wednesday Chairman Powell said “it’s not time yet” to discuss changes, as the U.S. economic recovery remains “uneven and far from complete.” Almost immediately, the yield on 10-year Treasuries traded lower, and the U.S. dollar fell by about 0.5%. A lower dollar only adds to inflationary pressures. Interest rates rebounded the next day as investors continue to believe that interest rates are going higher, irrespective of the Fed’s dovish stance. Before the Fed announcement, the 10-year “breakeven” Treasury yield, which reflects expectations for inflation, had reached its highest level since 2013. Yet while acknowledging the surprising strength of the U.S. economy, the Fed maintained that inflationary pressures are “transitory.”

Where to go sector shopping

In general, stock prices have not soared despite that companies have exceeded expectations, often by a long shot. Historically, this has put a halt to further price appreciation, at least in the short term.

So, the question remains: Which stocks and/or sectors are best to buy on a risk/reward basis? In its April 26 report, Goldman Sachs made a compelling case that we’re about to enter a market phase characterized by the ISM Manufacturing Index still over 50 (expanding economies), but with expansion slowing. (ISM surveys are generally considered reliable economic indicators.) Many global economies have ISM Manufacturing and Services levels above 60, with some even at all-time highs. But because the world’s economies are improving on a rolling basis, the expansionary phases of economic growth could take longer than usual.

In such an environment—with interest rates rising and the yield curve steepening—value stocks seem to be best, especially energy and financials. The April 26 Goldman study showed that value stocks should outperform more cyclical stocks like industrials. (Growth stocks could also be attractive right now.) But there’s a caveat: For value stocks to outperform during this stage of the market cycle, interest rates must rise.

Meanwhile, data compiled by Morgan Stanley suggests that industrials (in general) are probably a bad risk/reward bet. But this sector also includes transportation-related stocks like UPS, which traded about 10% higher after it beat expectations on earnings and revenues. (UPS has the third-largest weight in the S&P 500’s industrials sector.) Although still subject to potentially higher energy costs, transportation companies—unlike other industrials—tend to be less subject to margin squeezes from other rising input costs. (It’s important to note that the Morgan Stanley data are based on a very small sample of this quarter’s stock price reactions to earnings announcements, both on the days of the announcements and three days later. Industrial stocks have tended to fall further after three days. There isn’t enough information to conclude anything on some other sectors, including energy.)

For investors, selectivity in the industrial sector will be especially important. Beginning on April 23, cyclical and value stocks have performed best on consecutive days—a stark contrast to the daily fluctuations between those and more defensive sectors in the few weeks prior. 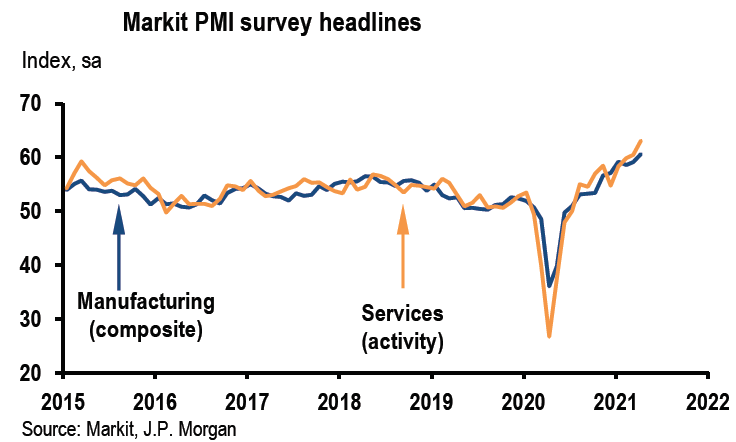 A great deal of evidence points to the very strong possibility that inflation will be more persistent than the Fed expects. Indeed, the Fed could end up being “behind the curve” in its ability to control rising prices. Higher inflation should lead to higher interest rates. The 10-year Treasury yield is still expected to top 2% this year. Cyclicals and, especially, value stocks should outperform in such an environment, but the outlook for some parts of the industrial sector isn’t as encouraging. We continue to favor high-quality growth stocks as part of a balanced equity portfolio. While a sudden spike (vs. a gradual rise) in inflation and interest rates poses the greatest risk to growth stocks, volatility should present favorable opportunities to add to desired positions.

The views and opinions included in these materials belong to their author and do not necessarily mirror the views and opinions of NewEdge Capital Group, LLC. The trademarks and service marks contained herein are the property of their respective owners. Unless otherwise specifically indicated, all information with respect to any third party not affiliated with NewEdge has been provided by, and is the sole responsibility of, such third party and has not been independently verified by NewEdge, its affiliates or any other independent third party. No representation is given with respect to its accuracy or completeness, and such information and opinions may change without notice. Information shown is as of the date of this letter, unless otherwise noted. All data are subject to change without notice.

These materials do not constitute an offer or solicitation in any jurisdiction to any person or entity. This communication is not intended to, and should not, form a primary basis for any investment decision. The information and analyses contained in herein are not intended as tax, legal, regulatory, accounting or investment advice. Any such information contained herein is general and educational in nature and should not be construed as advice. Please consult your own tax advisor for matters involving taxation and tax planning and your attorney for matters involving trusts, estate planning, charitable giving, philanthropic planning and other legal matters.

Investing involves risk, including possible loss of principal. Past performance is no guarantee of future results.

This report has been prepared solely for your confidential use. Our arrangements with third-party data providers may limit the redistribution of certain information contained in this report beyond our direct clients. Accordingly, no part of this report may be redistributed without our written permission. NewEdge Advisors marks its most successful recruitment year in its history, adding 17 teams and 37 advisors. NEW...